Bathroom fans have an important job to do says Edmonton electrician. But all too often, they are not doing that job for many different reasons. Homeowners need to take responsibility for this. 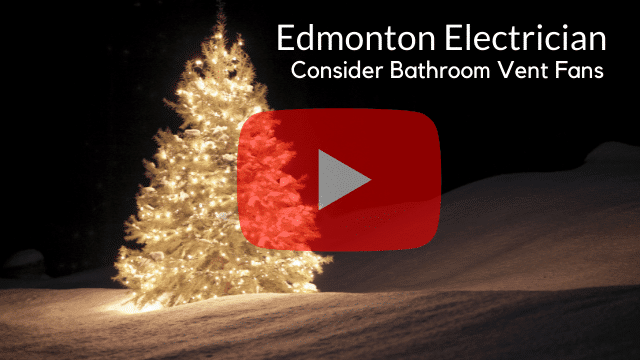 The job of a bathroom fan is two. Suck out all of the humid air in a bathroom. And vented outside of the house. The reason why this is so important. Is because moisture and humidity. Can wreak havoc within a home.

Humidity causes problems such as allowing. Different materials to start to rot. The subflooring, if humidity settles into it. Can become soft, and mushy when it rots. Damaging the floor, and causing problems.

The studs, and wooden frame inside the walls. Can get mushy and start to rot. As well as the drywall, the ceiling. And almost anything that is not aid out of metal or stone. Also while rotting can cause structural damage.

And because these components of the house to be replaced. Through an expensive renovation. While it is expensive, it is not going to cause damage to people’s health. However, humidity and moisture.

Also creates the perfect breeding ground for mould. And mould on the other hand. Is not only destructive. But it can negatively impact the health of the people who live in the home. Black mould is considered toxic.

And the spores can float through the air. Causing all sorts of problems health wise. People often end up with rashes and hives. If they live in the home with black mould. As well as develop respiratory illnesses.

And even autoimmune diseases. Homes that have black mould are actually considered extremely dangerous to the people that live there. Which means the job of a bathroom ventilation fan.

Of eliminating moisture. Is so important, so that people do not end up with a rotted out house. And health issues from black mould. However, many homeowners do not understand. How important this is.

Or, do not even consider their bathroom fan. Until it is too late. They should ensure that it is in good working order. And the way to do this. Is first of all, according to Edmonton electrician. Is to regularly dust it.

Bathroom ventilation fans are a magnet for dust. Because as dust floats through the air automatically. The humid air causes the dust. As it is sucked past the fan. To stick to all of the different components of the fan.

Such as the grill covering the fan itself. The fan blades, and the few inches of venting. Therefore, Edmonton electrician recommends homeowners. Take a vacuum brush to the grill of the fan.

Once a month, this five-minute job. Will help ensure that the fan is in good working order consistently. And then, approximately once every three months. Homeowners should pull that grill off.

And vacuum the dust off of the fan blades. Not only will that cause the fan to continue to be in good working order. But it can also eliminate a lot of dust in the home. Improving the air quality for all.

Often, homeowners do not think of their bathroom fences Edmonton electrician. Until it either stops working. Or it starts making a terrible sound. These are surefire signs that they need to replace their bathroom fan.

Bathroom fans play an important job. Of eliminating moisture from the home. So that it cannot cause problems. Such as rotting out studs and subflooring or drywall. And eliminating the perfect breeding ground for mould.

However, choosing the right bathroom fan can be overwhelming for many. Who have perhaps never gone shopping. For bathroom fan in their life. And do not know what to look for.

Calling Edmonton electrician can be extremely beneficial. Since they will be able. To walk homeowners through all of the options that they need to know. The first thing that they will discuss is.

Finding the right power of fan that they need. For their size of bathroom. Fans must move the air in a bathroom. And the more air they have to move. Because of a larger room. The more powerful the fan needs to be.

This power is referred to in how much cubic feet of air. The fan can move in a single minutes. This is written on the fans box as CFM. The minimum CFM that fans come in is fifty.

While the largest is one hundred and fifty. Edmonton electrician will be able to calculate. The size of the room, and how much cubic feet of air. Needs to be moved within that room. And then figure out what power of fan they need.

It can still move the required amount of air. Once they have the correct size calculated. They can then the start choosing. The different fun options. That bathroom fans now come with.

One of the most popular options. Is a noise free fan. Whether people simply want peace and harmony in their home. Or, they do not want to disturb people. Who might be sleeping, when someone else.

Wants a shower or a bath. Some people may want to have an energy efficient bathroom fan. Because they want to have a small carbon footprint. Or they simply want to save money on their energy bill.

Whether people want to have their favourite music playing. While they shower, or have a relaxing bath. They want to listen to their favourite podcast, while getting ready for work.

They will also be able to expertly install the fan. So that people do not have to worry. About getting the right fan installed correctly to protect their home.