What’s up Edmonton, it’s Ryan Hauer, your Edmonton Electrician here today with Howard power electrical. And we want to talk to you today about aluminum wiring. We’re going to go over why it’s bad. What’s, what’s so bad about it, how you can rectify it and you know, what solutions we can do to there how long that rectification aluminum, maladaptation, whatever you want to call it. 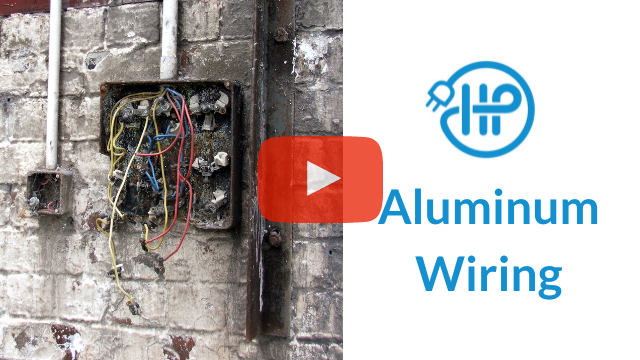 How long it’s going to take what you can do for your electrical contractor first to make it go nice and smooth and a little things to watch out for there. So this isn’t a video showing you how to do it. This is a video showing you to what you want to watch out for, with this aluminum wiring and how to get it done. So we’ll dive right in here. First, why is aluminum wiring bad? If you’re watching this, you’re probably just bought an old house or you’re looking to buy an older house and it came up on your home inspection report that you have aluminum wiring.

So don’t be too scared. There is some solutions, but it’s at why it’s bad is traditional aluminum wiring before the eighties. Typically it oxidizes as pure aluminum. And when all aluminum oxidizes by aluminum’s nature, chemically it reforms a resistive film, a resistive compound around that wire. So oxidization occurs with just about any metal. But when you have that with copper, it turns green like a penny, but it’s still conductive with aluminum. It’s not conductive. That resistive film itself is resistive and resistance makes heat and heat makes fire. And that’s why a lot of your insurance companies, aren’t going to want to insure you if you have aluminum wiring in your house. So the problem, again, isn’t the aluminum wiring itself in the walls. It will be a little bit brittle and that’s probably its weakest point, but at the devices at the points of terminations, that’s where you’re probably gonna want to see see about rectifying it, having an aluminum, aluminum adaptation, but for aluminum adaptations at three top three ways, you can really do it.

The most common ones. What we’ll start with there that’s an aluminum adaptation and we’re gonna use aluminum rated Marettes with copper pigtails to a brand new device. So we’ll take out those old devices, those go in the trash now, and then we strip off your aluminum very carefully because it’s extremely brittle. And if you move it too much or fold it or bend it and re-bend it, it’s probably going to break on you. So we know what to look for with that. I mean, this is something that we do once a week as a, as a company, but once a once a week at the very least. But if if you’re doing a DIY kind of stuff, yeah, it’s not rocket science, I’m sure you could figure it out, but you’re going to have some stress. If you try to dive into this yourself, that’s why we advise you to hire a professional Edmonton Electrician.

Get Rid Of Oxidized Wires

Here in Edmonton, we are the highest rated electrical contractor by Google, and we would love to work with you and give you a fair price and get that done for you. But anyways, again, back to the the whole point of this video here, just to educate and bring some knowledge out there. Aluminum rated Marrettes with copper pigtails, and you’re going to use no locks or penetrants, I’m sort of anti oxidization compound. Aluminum, noalox, no aluminum. Oxidization that’s the most common one that we’re going to use for that brand new aluminum wearing kind of from the eighties onwards aluminum wiring has changed in the sense that now they use a aluminum mixed with other metals so that it doesn’t have the reaction that galvanic action that corrosion, that a typical aluminum wearing has from before the eighties. So they’ve improved a little bit on it.

There’s a big debate whether you use no logs or not use no logs, but that’s where that comes. But if you’re using all aluminum wiring, use the no locks and use a limit of rated Marrettes, they look just like regular Marrettes. However their spring from the manufacturer is more springy. So it can, it can deal with that. Those dye, similar metals, expanding and contracting at different rates. It can handle that rather than a typical Marrettes that might break on you, or it might just not hold a true connection. So that’s your very first, most common approach. We got pricing for that. Give us a call and we can do that for you. The other two common approaches that you’re going to see for that would be aluminum rated devices. So devices themselves that are a little bit more expensive, but they’re rated for either aluminum or copper.

And the third way that you’re going to see is it’s the most expensive way, but it’s not a band-aid fix. It’s going to full measure, it’s doing it a hundred percent, right. And it’s gutting that house and ripping out all that aluminum wiring. And then you’re going to have to rewire the whole house and redraw all the whole house. So good solution. It’s a kind of a dynamite solution, but it will solve your aluminum wiring problem in your old probably forties, fifties, or sixties built home. Typically just the upstairs is going to have your aluminum wiring. Your basement probably won’t have it. That was probably finished after the fact, but that’s typically what we see. So those are the three ways that you can rectify and solve your aluminum wiring issue. But again, it’s going to probably take it’s probably going to take Edmonton Electrician up to two days, depending on the size of the home.

Edmonton Electrician | Why You Should Upgrade Aluminum Wiring

One to three days for Edmonton Electrician. If it’s a little town home might take a day, but otherwise it’d be a little bit bigger of a job. And the material was eliminated grid and rents are probably one of the bigger costs there, aside from the electrician’s labor. But that’s what you’re looking for as far as a length of time, if you’re wondering how long you’re going to have to have electricians taking up space in your home and that’s, that’s it there. And then the other side of things too, is if you’ve already moved into those home you’re going to have furniture everywhere we would ask, and any electrical contractor would really appreciate it. If you just had your furniture moved out away from the wall for about two feet, give us a guy, give a guy some room to work there because he’s going to have to get that box and get that wire out and, and strip it and put on the no locks.

And Edmonton Electrician won’t make a mess of your home. And we want to be able to do the work nice and clean. The other thing you’re gonna want to watch for is whoever you’re hiring an electrical contractor, typically they’ll have a master electrician on staff. We have two on staff, but your insurance company is probably gonna want to see a letter stating that the aluminum adaptation has been performed and that it has been signed off by a master electrician. Typically they’ll want to see that in order to increase insurance for your home to, to keep insuring your home. That’s what we see a lot of the time for our clients there. So make sure that they’re going to give you a letter and if they are going to charge extra for the letter, make sure they’re upfront about that. A lot of electrical contractors might not always be upfront about that.

They’ll happily do what your aluminum adaptation. And then when you ask for a letter, they’ll probably want a couple of hundred bucks for that letter too. So just to manage expectations, always ask those questions first. And then when they’re wearing it, good question to ask your electrician or your electrical contractor, is, are you going to be putting the wires around the screws or in the back of the device? Oftentimes the cheaper electrical contractor will backstab the outlet. And the problem with that is that those connections are we, we get tons of service calls every week for fixing those connections. It’s a spring type connection that holds the wire in the back of the receptacle. And if you have any sort of vibration wear or tear or heat or high current flow that little spring is going to loosen up over time and that wire can pop out and create bigger issues.

The proper way to do it is clockwise around the screw. Then it will never come off and it will never loosen up and you’ll have plugs from the sixties and they’ll still be holding true and holding strong. So watch out for that as well as that crumbling wire sometimes that wire can crumble up into the box and they might have to pull more wire out. So if a guy says he’s going to have to do drywall damage, typically, that’s what they’re referring to. We have few solutions to avoid that. However if you’re, if you’re tackling it yourself, you might find out that the wire’s gonna crumble back and crumble back, and then you’ll have to open up the wall and do a, do a splice further up. So yeah, save yourself the stress, hire a professional electrical contractor. Give us a call here at Howard power electrical 780 935-0622.

You can visit our website hauerpower.ca. And if you liked this video, be sure to like and subscribe. But more importantly, if you have any other electrical concerns that you’d like Edmonton Electrician to make a video about, let us know she does in the comments below there, and be sure to follow us on all our socials, Facebook, Instagram, Twitter have a great day Edmonton, and we hope to work with you soon and give you power. Our whole mission is to bring customer service and this video and all the other videos are just one more way that we like to reach out and try to educate as best we can have a great day guys take care until the next time.